Now that when the things are getting back on track after Covid-19 pandemic tractor industry has shown a faster recovery as compared to other industries as it has witnessed a growth incredible growth in the month of August 2020 as compared to that of August 2019.

Let’s look at the data given by the Federation of Automobile Dealers Associations (FADA) to know about the latest market shares of various tractor manufacturing companies and its aspects.

Mahindra and Mahindra is followed by its another division that is Swaraj division in this list recording sales of 10,536 with a market share of 15.63% that is 0.95% higher than the market share during august 2019.

While International Tractors Limited has beaten TAFE Limited this month and shown a positive growth in sales jumping to 8577 units that were only 6,384 in last financial year. It grabbed the third position on the list with a market share of 12.72% while TAFE Limited showed a downfall with a decline in market share from 12.29% last year to 11.39% this year but it still managed to increase its sales from 6483 to 7675 units this year and remain at the fourth position. 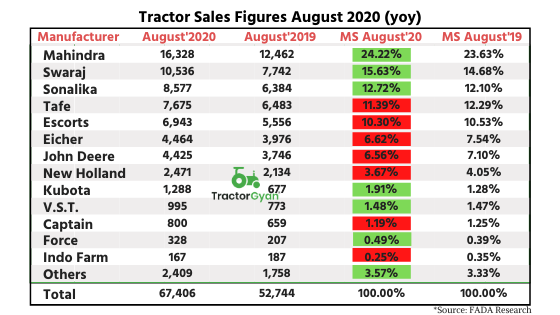 Following Tafe Limited, Escorts Limited and Eicher Tractors has also shown a decline in its market share while witnessing growth in sales.

Brands like John Deere, Eicher, and CNH international have shown a downfall in the market share in August 2020 as compared to 2019. Only Kubota Tractors has shown a significant rise in market share which is 1.91%.

However, all 4 brands have shown a rise in units sold when compared to their last year's performance.

Kubota Tractors has not been a very big player in Indian tractor markets but with its recent rise in sales and shares, it has proven its potential.

Even though FY21 was hard struck by the pandemic of COVID-19 agricultural sector as shown positive growth and so has the tractor market of India with 67,406 units sold this year. With government policies specifically focusing on the agriculture sector, tractors' market is expected to show a rise in the coming months.