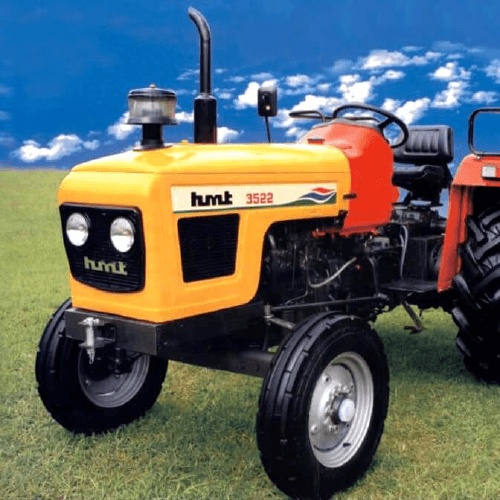 HMT Tractors are famous for tractors with high durability, high fuel efficiency, and excellent for working in the agricultural field. They have tractors in the range from 25 HP to 75 HP.The price range of these tractors vary from 3 Lakhs to 7 Lakhs .
HMT Limited, formerly Hindustan Machine Tools Limited, is a state-owned holding company. The company's wholly owned subsidiaries include HMT Machine Tools Limited and HMT International Limited. Hindustan Machine Tools was incorporated in 1953 by the Government of India as a machine tool manufacturing company. Over the years, HMT diversified into watches, tractors, printing machinery, metal forming presses, die casting and plastic processing machinery, and CNC systems and bearings. HMT is headquartered at Bengaluru (Bangalore). VST tractors sales figure depicts the gradual increase in the sales of the tractors and power tiller... HMT tractors are one of India's oldest tractor brands. The Indian government founded the company in 1953 to produce heavy machine tools and other equipment. HMT is a government-owned firm that falls under the Ministry of Heavy Industries and Public Enterprises in India. Hindustan Machine Tools is the abbreviation for HMT.

Since its inception, HMT has offered more than 35 tractor models. HMT Tractor models ranged in horsepower from 25 to 75 HP. It has manufactured numerous tractors in conjunction with Zetor Tractors by sharing platforms of similar tractors. HMT Tractors are known for its long-lasting, fuel-efficient tractors that are ideal for operating in the agricultural field. They sell tractors with engines ranging from 25 to 75 horsepower. HMT tractors price Starts from Rs 3 lakhs to Rs 7 lakhs*.

HMT Tractors, also known as Hindustan Machine Tools Tractors, are a government-owned enterprise that was founded in 1953. It also produces tractors that are long-lasting, fuel-efficient, and ideal for use in the agricultural field. HMT tractors, or Hindustan Machine Tools tractors, were first introduced in 1953. It also functions under the authority of the Indian government. We can also refer to it as an Indian tractor manufacturer.

In 1971, HMT Tractor began operations in a specialized joint venture with M/s MOTOKOV, Czechoslovakia Republic. HMT tractor began its operations with the assembly of a 25 horsepower tractor at a production line in Pinjore, Haryana. It has produced tractors with engines ranging from 25 to 75 hp over the years. By expanding its tractor range to cover a substantial portion of the cultivating network's uses, the company achieved market leadership in tractors.

Because HMT is a government-owned corporation, it is not only limited to the production of consumer goods, but it is also known for producing heavy defense equipment for the Indian Navy at its plant in Kochi, Kerala. HMTs is also a major exporter of Preet tractor engines.

The company now has three tractor manufacturing plants in India, located in Pinjore, Haryana, Mohali, Punjab, and Hyderabad, Andhra Pradesh. It's a well-prepared R&D center, as defined by the Indian government's Department of Scientific and Industrial Research.

The Tractor Business Group of HMT has been the proud recipient of a number of National Productivity Awards. It's also been certified for ISO-9001 by KEMA in the Netherlands. For assembly and gathering activities, there is an established maximum of 18 Thousand Tractors. It's an in-house showcasing organization with 17 Area Offices, 11 Stockyards, and over 300 HMT Tractor Dealers across the country. More than 40 Ancillary Units are capable of supporting HMT Tractors. It's a team that's been trained and has a lot of expertise. Since its inception, HMT has built and displayed over 3,70,000 tractors in India and overseas.