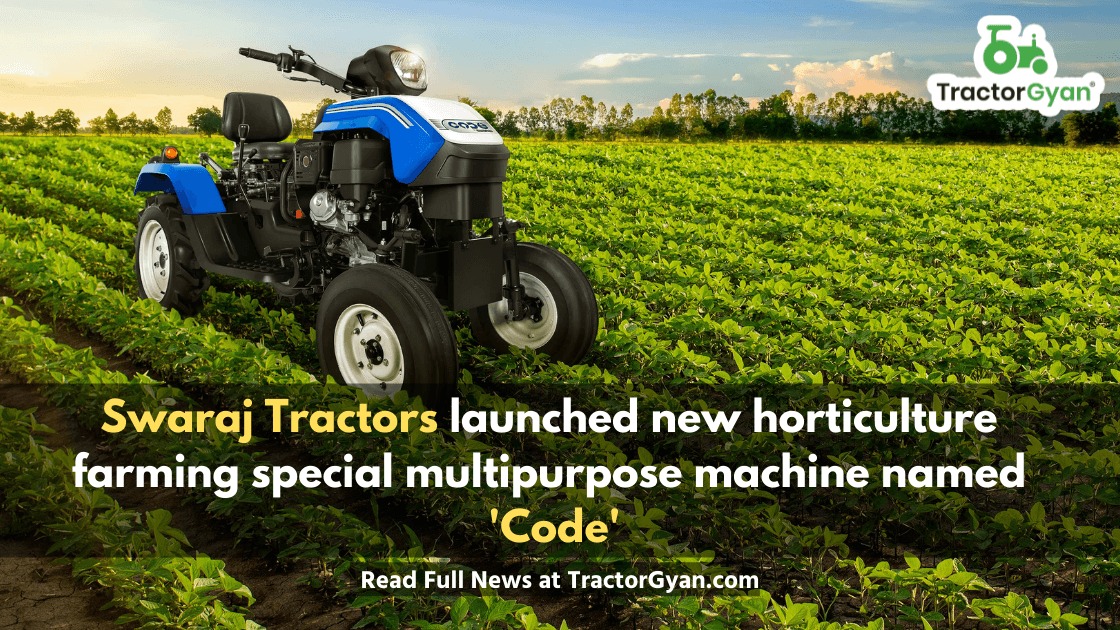 Swaraj Tractors, a part of Mahindra Group, on Thursday unveiled an indigenously designed multi-purpose farm mechanisation solution to scale up horticulture segment in the country.

Christened as CODE, the solution is conceived with the idea of eliminating drudgery of labour involved in horticulture farming.

The narrowest and the lightest ride-on machine, the 12 HP (petrol powered) CODE aims to revolutionise horticulture farming in India allowing farmers to carry out operations in narrow rows for various vegetable and fruit crops.

"The company is trying to bring new solutions in the area of horticulture where currently there is not much mechanisation...we are actually wanting to pioneer this space. With the help of machines like CODE, more land could be cultivated which could lead to the increase in income of farmers," Chief Executive Officer Harish Chavan told PTI.

The horticulture segment has a huge scope for mechanisation in the country and CODE by Swaraj is a specially crafted machine developed with deep consumer insights and capturing farmers' needs in the horticulture space, he stated.

Currently there is intense involvement of manual and animal labour in this segment, and the company's product is a pioneering step towards bringing mechanisation to this segment, he added. The company would be announcing the product price later this month, Chavan said.

Elaborating on the opportunity, he noted that the horticulture segment currently accounts for around 30 per cent of the country's Agri GDP.

"The area coverage is just 17 per cent. People are holding back in this segment because they find this activity difficult. The crops are very remunerative and if more land comes under cultivation, farmers are going to benefit," Chavan said.

Mahindra & Mahindra President (Farm Equipment Sector) Hemant Sikka noted that with horticulture's growing share in India's Agri GDP over the years, there is an urgent need to focus on this segment for increase in productivity.

"With the launch of CODE, we aim to provide easy access to affordable and innovative technology to the farming community," he stated.

The ground clearance of the machine can be increased as the crop grows in height thus reducing the dependency on manual operations. Besides, the bi-directional feature enables operations with attachments mounted in front of the machine making it extremely suitable for reaper operation in paddy.

CODE will initially be launched through Swaraj dealerships in Gujarat, Karnataka, Andhra Pradesh and Telangana and will soon roll-out across other states in a phased manner.