Home| All Blogs| FARMING IN INDIA: FROM INDEPENDENCE TILL NOW- THE JOURNEY
SHARE THIS 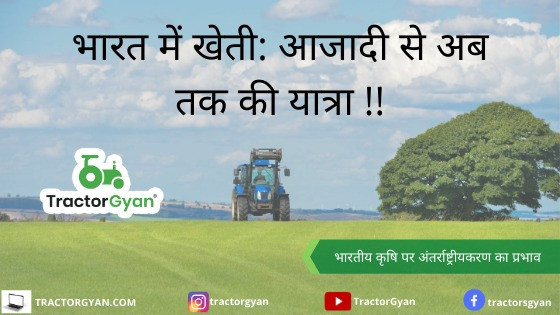 FARMING IN INDIA: FROM INDEPENDENCE TILL NOW- THE JOURNEY

Agriculture in India dates back to Indus Valley Civilization Era and even before that in some parts of Southern India. Today, India ranks second worldwide in farm output. Agriculture has always been pivotal for Indian economy since independence.It plays a crucial role in alleviating poverty and ensuring the sustainable development of the economy. Since independence, Indian agriculture has come a long way. From the state of food deficit to food surplus, the sector has witnessed various ups and downs.

Even though the area production and productivity has increased but the share of sector in contribution to GDP has been continuously declining. The main reason behind is the rapid growth of industry and service sector in the country.

After Independence, India followed an agricultural development strategy that focused on self-sufficiency in staple foods like wheat and rice.

To make the country self-sufficient in food grains and reduce our dependence on imports, high input driven “green revolution” agriculture was introduced in the late 1960s in pockets of northwestern and coastal peninsular India.

IMPACT OF GLOBALISATION ON INDIAN AGRICULTURE

Agricultural sector reforms and structural adjustments were initiated in India since 1990s after it accorded to the World Trade Organization (WTO) agreement to integrate with the global trade.

Reduction in public sector investment in agriculture, failure to encourage sustainable farming practices, and unremunerated prices for agricultural produce were among the factors that turned agriculture into a losing proposition. The damage was more pronounced in cash crops like cotton.

Farm suicides are the outcome of the continued neglect and apathy of the farm sector. Besides the policymakers, a significant role is also played by agriculture scientists and economists. About 20 years after the Green Revolution began, and somewhere in the early 1990s, the global economic thinking shifted to shrinking agriculture and boosting industry.

There is a wide array of factors that have led to the increasing spate of farmer suicides in India. The lands are not as productive as before, the markets are failing, the debts are piling up, and the pests cannot be kept at bay. The government system of minimum support prices, which has resulted in inflation and increased wages. Issues of weather and climate Scales of operation Lack of farm labor One of the most crucial problems faced by farmers in India is regarding marketing