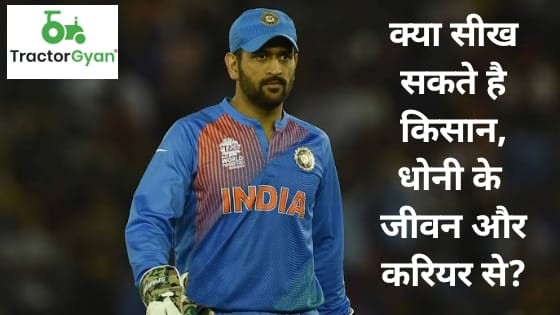 What farmers can learn from Dhoni's life and career

"Dhoni" a name itself an emotion for every Indian cricket lover. We can't thank him enough for what he has done for our nation. He has made us feel proud of various events at the international level whether it is the T20 World Cup 2007, the ODI World Cup 2011,  or the Champions Trophy 2013.

Here we are going to know what our farmers can learn from Dhoni's life and career. The stalwart cricketer is an epitome of so many things and below are the five things that one as a farmer can inculcate in his life

Sheer Dedication: There was a strong dedication in Dhoni towards his passion and that's the reason he was able to clear all the obstacles that came into his way to pursue cricket as his career. His journey from a ticket collector to the best captain of the Indian cricket team justifies his sheer dedication and that indeed a very crucial element that plays a very prominent role in shaping anyone's career. A farmer should always be very dedicated to his work then only his work will be paid off efficiently.

It is something for which MS Dhoni is known for. He always used to be very calm and composed in any kind of situation. He neither allowed his splendid success to climb on his head nor he got depressed by his defeats. Therefore, an individual should also incorporate the equanimity in his life as a farmer to remain in an equilibrium position in any kind of situation this will lead you to a long go.

One should always be confident in what he or she does. Because your confidence multiplies the possibility of your success in any way. Dhoni has taken a lot of decisions on the field in his career that seemed to be incorrect for so many people but due to his confidence in his decisions, he was able to prove them wrong. Therefore, whatever decision you take to advance your farming you should have confidence in it and hopefully, things will turn in your favor.

Even after achieving so many awards and titles he is very down to earth, he never forgot his roots where he came from and that actually helped him a lot to sustain in the time of struggles. Where ever you reach you should not forget the point from where you reared from as it will bolster you in many ups and downs in your life. A farmer has to face so many mixed phases in his life but if you are connected to your roots, you will definitely pass every hardship in your life.

This is the need of an hour to switch to organic farming and Dhoni himself became an example of opting it recently. He started organic farming on his farm at Ranchi through which he also promotes the method so that many farmers will adopt it. The method is a sustainable way of farming. It will give you a satisfactory profit at the same time will preserve the environment.

There is a lot to learn from Dhoni and his career till now is full of such learnings. Hopefully, he will contribute to Indian cricket in coming years also without the jersey number 7, and continue to inspire every Indian.