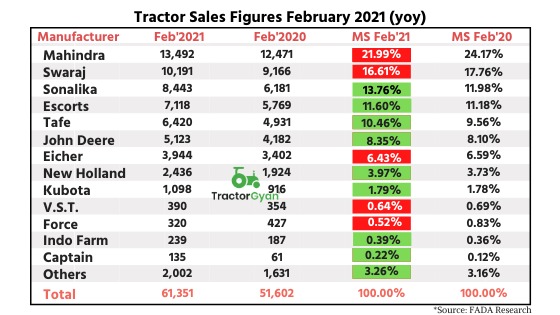 The second month of 2021 looks a lot more promising for the domestic tractor market as total sales figures are boosted by 18.89%.

Recording a huge surge in sales, 2021 has been a year of new opportunities for all tractor brands as even after the increase in sales of all major brands, some major players have lost their share in the market which opens up the market for new existing possibilities and also makes the game pretty interesting.

February 2021 has been fruitful for almost all brands in the current Indian domestic tractor market, other than force motors which have seen a decline in its sales figures and remain the only one to face that.

Till now it has just been an overview, lets now look at the number as the Indian tractor market is all about numbers. Here are the details of sales figures released by the Federation of Automobile Dealers Associations (FADA).

Let's first look at the bigger players of the game-

Continuing its reign over the Indian tractor market, Mahindra and Mahindra again remains at the top of sales figures , selling 13,492 units, which is a boost of 1021 units, though even after such great growth, it has lost some of its share in the market, which means that there are new opportunities for the smaller players of the market to grow. Mahindra and Mahindra had a share of 24.17% which has shrunk to 21.99% YOY in February 2021.

Second on the charts is again a division of Mahindra and Mahindra, the swaraj tractors, which has recorded an increment of 1025 units though its share in the market has reduced from 17.76% to 16.61%. Swaraj tractors sold over 10,000 units.

Time and again ITL has found itself competing with the best in the business, it's again ranked at the third position selling 8443 units of tractors ,while it records a huge increase in its sales as well as market share which has swollen from 11.98% to 13.76%.

Escorts Limited has also shown progressive growth as its sales figures have ballooned significantly from  5769 units to 7118 units this February month 2021. Its market share though almost remains the same at 11.60%.

There are some signs of relief for TAFE limited as they have now shown some growth, with the increase of 1489 unit YOY in February 2021 which is significant as its market share boosts as well from 9.56% to 10.46%.

By selling 5223 units , John Deere India Pvt. Yet again remains at number 6 on the charts, with an increase in both sales numbers and its market share, while its competitor Eicher tractors though has a slight increase of in its sales number, has lost its share in the market by a small margin. Its market share has now taken a dip from 6.59% to 6.43% as of February 2021.

Amongst other major brands CNH industrial and Kubota tractors continued their growth with an increase in both sales numbers and their share in the pie of the Indian tractor market. Kubota sold over 1000 units while CNH manages 8th position in the list selling 2436 units of tractors. Both Kubota and CNH have shown an increase of 512 units and 182 units respectively. though Kubota tractors have shown very marginal growth in market share.

All we have left are the smaller players, let's look at their numbers and talk about what it signifies-

This month too hasn't been much fruitful for the more modest brands as most of them have lost a significant part of their market shares and very low increment in sales figures as well. Force Motors has shown negative growth in sales figures as they drop from 427 units to 320 units with a huge loss in market share as well. Other smaller brands like VST tillers and Indo farm limited have shown an increase of 36 and 42 units selling 390 and 239 units respectively.

The only modest brand to show great growth in its sales and market share is Captain tractors they managed to sell 135 tractor units which is great for such small brand., they have somehow figured out to double their sales as well as increasing their market share which was very small earlier.

What do these figures tell us about the future?

The interesting to note from YOY sales figures of February 2021 is that many big brands like Mahindra and Mahindra have lost a part of their share in the market which opens it up for new promising opportunities to mid-sized or modest brands. This means that as the battle of tractor more fierce, it will be beneficial for the customers as all brands will now try to grab this opportunity through expanding and improving their services which are a win-win for both tractor brands and their customers

The above numbers do not have figures from AP, MP, LD, & TS as they are not yet on Vahan 4.

Vehicle Registration Data has been collated as of 07.02.21 and in collaboration with the Ministry of Road Transport & Highways, Government of India and has been gathered from 1,273 out of 1,480 RTO's.