As now the phase of lockdown has almost passed and things have almost become normal and in the same manner, tractor industry is not only back on track but it has shown a massive growth as this month the sales of tractors have jumped from 38,008 to 68,564 units as compared to that of September 2019.

Let’s interpret the data given by the Federation of Automobile Dealers Associations (FADA) to understand the effects of these numbers on various companies.

This month again Mahindra and Mahindra has obtained the first position in the market shares list with an increase in tractor sales from 8,834 to 15,597 units while experiencing a decline in market shares and reaching 22.75% that was 23.24% during September 2019.

This time again Swaraj division of Mahindra and Mahindra has successfully retained its second position in the list while efficiently managing to increase both its tractor sales and market share reaching to 11,466 units and 16.72% that were just 6,116 units and 16.09% during the same period in the fiscal year 2019.

Swaraj is followed by International Tractors Limited with a market share of 12.80% and sale of 8,778 units that are almost double of the sales of that were in September 2019. This month too, TAFE was beaten by International Tractors Limited but it managed to retain its fourth position while showing good growth in market shares and sales than compared to last year by grabbing 11.30% of market shares and obtaining sales of 7,749 units of tractors.

This month too Escorts Limited has shown a decline in market share while maintaining the fifth position in the list. Its market share has reached 10.76% that was 10.97% in September 2019 but its sales have increased from 4,168 to 7,377 this year. 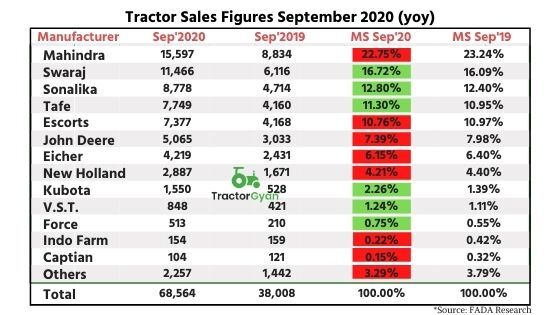 New Holland has again shown a decline in market shares while retaining its place on the list, on the other hand, Kubota Tractors too, have retained its place in the list but while successfully managing to increase its market share up to 2.26% that is 0.87% higher than that of September 2019.

But all of these 4 brands John Deere, Eicher, New Holland and Kubota have managed to make a significant rise in their sales this year. The way Kubota Tractors has continuously shown growth in its Market shares and sales tells us that it has a great future ahead in this market.

How have smaller brands performed?

What future awaits for us?

The coming year has many challenges awaiting for agricultural sectors and ones those dependent on it. Total tractor units sold across the country has greatly increased as compared to last FY but it would be a big challenge for Tractors brands to maintain this growth. Constant focus on policies and advancements would be required.