The year 2021 was seen as a year full of recovery and new possibilities after the last year since the economy was affected a great deal by the pandemic. As we are now through the first month of 2021, let's see if it has met its goals as a time packed with fresh hopes for various tractor industry brands or not.

In this article, to find out how the various brands of the Indian tractor industry did in the very first month of this New Year, we will look at the data given by Crisil. 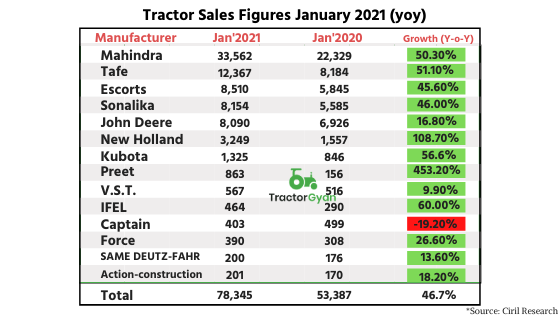 We can see that most of the brands showed a positive acceleration in their graphs just by taking a look at these wholesale numbers, but at the same time, smaller brands like Captain are still struggling to sustain their profits.

Let’s study this data in a more detailed manner to look more specifically at how different brands have performed in January 2021:

Even though these numbers can seem high in the short term, we will find out that Mahindra and Mahindra are increasing at a much slower rate than it seems when we look at these numbers in the long term. But this high number of revenues in the first month of 2021 shows this company's high rate of growth in 2021.

Now, when we look at TAFE's total sales for the first month of 2021, when compared to Mahindra and Mahindra, the number might seem tiny, but for TAFE it is 51.1% more than the sales it witnessed in January 2020. And even if we look at TAFE's long-term growth rate, we will find that it is rising at a reasonably decent pace and will accomplish a lot more in the next year.

If we look at the sales figures after TAFE, we will find out that TAFE is followed in the list by Escorts. Escorts experienced sales of 8510 tractor units during this month and showed a rise of 45.6 percent. But if we look at the success this sector has undergone in the last few months, we can see that this enterprise needs to do even more than what it is now doing in order to reach a high rate of growth in the Indian market.

With total revenue of 8154 units, Sonalika ITL reported a total increase of 46% during this month, relative to the same time in 2020. And as we look at the success of this business in the last few months, there is no denying that this company, with its strong tractors, is steadily taking a huge place in the hearts of people.

During this month, John Deere did not demonstrate any improvement in its revenue by witnessing sales of just 8090 tractor units, which were already 6926 in January 2020. Also in the last few months, relative to its rivals, it has not grown much.

Via the sales of 3249 units of tractors, New Holland India showed a huge increase of 108.7 percent in its sales during the month of 2021. While this amount is really small relative to John Deere, it is a really big deal for an emerging business like New Holland. Its steady growth in the last few months and such a high spike in its current sales show us the Indian market's bright future for this company.

New Holland is followed by another emerging Kubota brand, which showed a rise of 56.6 percent by capturing 1325 tractor unit sales. For the last three months, the growth rate of this company on the industry tells us how well this brand has done to make a strong market position for itself.

By witnessing growth of 453.2 percent in its revenue compared to January 2020, Preet, even as a local emerging brand, has seen such a significant rise in its sales during this month. The continuing attempts to make its place in this industry and to represent its customers with the best have led to some excellent results for Preet. While Preet still has a long way to go, we can still see a bright future for this brand lies ahead.

Let's take a look at how minor players have done in the tractor industry.

While it is much smaller than the total revenue, Force Motors has seen a respectable growth of 26.6 percent, but it also can not rule them out of the game. SAME DEUTZ-FAHR and Action building revenues have improved substantially, showing sales increases of 13.6 percent and 18.2 percent during January 2021.

VST tractors' sales figures haven't shown much improvement as Y-o-Y sales have just increased by 9% as of January 2021. IFEL remains the only brand amongst the smaller brands to show huge growth in sales figures, recording 60% growth in January 2021 as compared to the last year's sales; it’s higher than the overall growth in tractor sales i.e. 46.7%.

Captain Tractors is India's only tractor brand that has seen a drop in its sales numbers, selling 19.9% fewer tractors in January 2021 than last year.

While Captain Tractors may have seen a decrease in sales during this month, the SAME DEUTZ-FAHR needs a lot more change than Captain as we look at the past few months.

This 46.7 percent increase in total tractor sales in January 2021 Y-o-Y indicates the new prospects and the bright future for this industry in the Indian market.