Home| All Blogs| AGRICULTURE 4.0 – THE FUTURE OF FARMING TECHNOLOGY
SHARE THIS 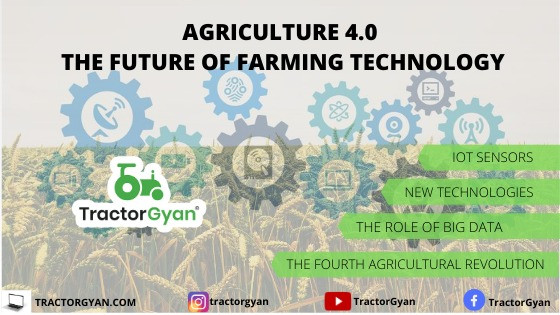 Agriculture 4.0 will not depend on applying water, fertilizers, and pesticides

The World Government Summit launched a report called Agriculture 4.0 – The Future Of Farming Technology,  for the 2018 edition of the international event. The report showcases the four main developments placing pressure on agriculture to meet the demands of the future:

Agriculture 4.0 will not depend on applying water, fertilizers, and pesticides uniformly across entire fields Challenging the traditional models and accepting Agriculture 4.0 governments can:

Agriculture 4.0 includes a greater focus on precision agriculture, the internet of things (IoT) and the use of big data to drive greater business efficiencies in the face of rising populations and climate change.

THE ROLE OF BIG DATA

Big data has the potential to benefit the whole supply chain and will play a greater role than ever before in transforming the agriculture industry. The advanced connectivity of a global agriculture network provides a vast number of benefits up and down the supply chain: Farmers can use their data to apply the right products, at the right rates, and at the right time; distributors can use data to source inputs and position themselves for maximum advantage in the market; manufacturers can improve their means of production and better target their customer base.

Big data isn’t so much about what the changes will be, but how we’ll get there. Data is the medium by which the industry can take its next steps for a more sustainable and profitable future.

The Internet of Things (IoT) has seen a huge acceleration in recent years, with smart devices becoming more prevalent, and increasingly able to share with one another.

Farm devices utilization of IoT is set to become the norm, not the exception, as mobile software becomes increasingly interoperable (i.e. different apps are able to share and use the same data sets). This would mean an end to entering the same data sets multiple times into different systems, significantly reducing financial and time costs that arise from human error. Sensors on farm are already used to monitor soil nutrition, temperature, moisture, and more. IoT means connecting all those systems together, removing the need to repeatedly enter data into multiple apps that don’t talk to one another.

New technologies are already disrupting the established norms of farming, with previously unaffordable devices now accessible and regularly deployed on farms across the world. Scout drones provide an “eye in the sky,” scouting for pests in the field or dry spots requiring extra attention. The latest advances in sensor technology means drones are now able to use additional wavelengths in the light spectrum to assess crops, spotting weeds and sick crops from the air.

Blockchain is also on the rise, creating a new mode of interaction in the supply chain: trust is established by consensus between parties and backed by technology, eliminating the need for an intermediary.

Each previous agricultural revolution was radical at the time ,the first representing a transition from hunting and gathering to settled agriculture. While technological innovation is thus not new to agriculture, emergent technologies, such as the Internet of Things, Cloud Computing, robotics, and Artificial Intelligence (AI), have the potential to change farming beyond recognition, hence the shift toward agriculture 4.0.

There is certainly not a shortage of uses for these technologies; smart farming approaches are being used to increase the precision of fertilizer, pesticide, and herbicide application . Smart farming approaches, including the use of Microsoft's Cortana Intelligence Suite, are currently being used to determine optimal planting dates for crops around the world, such as in India and Colombia . Unmanned aerial vehicles, or drones, are being used to aid weed identification , and robots are helping farmers to milk their cattle  and remove weeds .